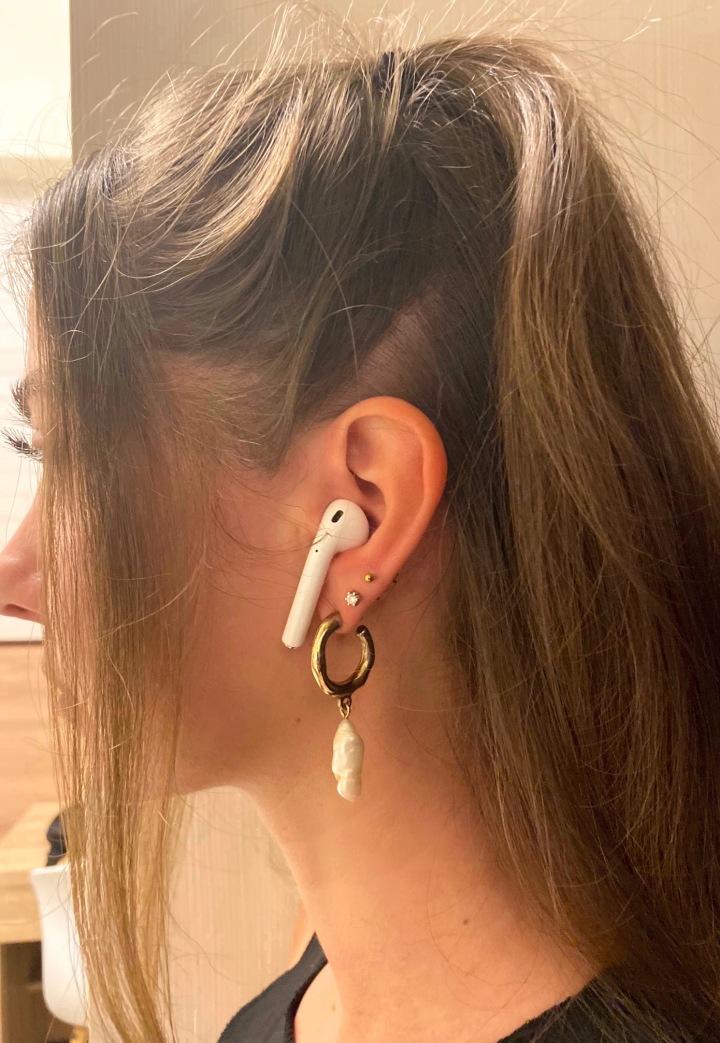 There’s a new social media app that I have been hearing a lot of buzz about the last few weeks, and it seems like it could really be the next big thing. The name? Clubhouse. Eager to not be late to the party like I was with TikTok (refusing to join for over a year until I was one of the few left NOT on it), I started to research this new (invite-only) app that is rumoured to be “the future of social media.” I even managed to scoop up an invite to the exclusive platform via a Facebook friend (thank you, Lucy!). After spending the entire weekend on Clubhouse, I thought I’d share my answers to the 5 most-asked questions about the new audio-only social media app everyone seems to be talking about.

The platform is a sort of combination between Facebook + Spotify + LinkedIn + Snapchat, but with one major difference…it’s is a live audio app, meaning it’s strictly voice-centered. There are no written comments, no likes, and no private messages, ONLY audio. On Clubhouse, your voice is your content. Nothing is recorded, and (much like Snapchat) there is no history, so once the words have left your mouth there is no playback option.

Essentially, the app allows people to listen in on or actively participate in live discussions. It’s like a never-ending conference covering an endless number of topics. You simply enter a room and start listening. Or, you can create a room of your own on any topic of choice, and see who shows up. The conversations can, and typically do, last for hours, sometimes days.

According to its creators, “Clubhouse is a place to meet with friends and with new people around the world—to tell stories, ask questions, debate, learn, and have impromptu conversations on thousands of different topics.” In my experience on the app thus far, it’s exactly that.

What started out as the latest Silicon Valley obsession, Clubhouse has begun to go global. As of now, it is only for those who receive an invitation from a current member. Each member is allotted a limited number of invites to give (online it says 1 invite per each new member is standard, but for some reason on my account I can give 2). Sounds pretty exclusive, right? Well, it kind of is! Also because many of the current Clubhouse members are pretty notable celebrities, which is a large part of the reason why it has garnered so much attention in recent weeks. The long list of celebs reportedly active on the app include Oprah, Drake, Virgil Abloh, Jared Leto, Kanye West, Ashton Kutcher, Azealia Banks, Kevin Hart, Estelle, 21 Savage, Chris Rock, Lupe Fiasco, and Tiffany Haddish, to name a few.

Even with the invite-only method, Clubhouse is growing fast! In December the app had just 3,500 members around the world, and within a month they’re now up to over 600,000 users, and counting. Current members of Clubhouse are primarily people looking for more real, life-like interaction from social media. They’re people looking to take part in or listen in on real candid conversations. People who wish to gain knowledge and expand their network. One user was recently quoted as saying, “The conversations and knowledge I’m able to accumulate just by logging in daily is literally worth thousands of dollars in masterclasses.”

If this sounds like something you’d be into, and you have an iPhone (for some reason the app is currently limited to Apple-users only), then Clubhouse might just be for you.

Think of Clubhouse as an informal mixer or casual house party with people from all walks of life in attendance. You can casually pop into conversations and chat with people in the virtual rooms, leaving to check out a different room at any point. And by chat, I mean actually speaking, since, as I mentioned, Clubhouse is a completely audio-based app where you literally talk to others (including the previously mentioned celebs, which many users are pretty thrilled by). You do have the option to upload a profile picture, but other than that there are no options for images or video on the platform

As you enter a room, you hear ongoing conversations happening live. If you want to participate in the discussion, you can ‘raise your hand’ giving the moderator the option to ‘call you up on stage’ to join in and speak. As you contribute to the conversation, you can even be made a moderator yourself, giving you power to call others up on the stage.

Alternatively, you can become a moderator of your own room. With an interesting enough topic, you can draw a decent sized crowd to join the discussion. Rooms and the conversations in them continue until the moderators shut them down.

And for the conversations you’d rather take a backseat to, the ‘mute’ setting allows you to actively listen in on conversations without speaking at all, an option many opt for. This feature is also great for more introverted users/people who hate the sound of their own voice (me!).

#4 – What Are You Supposed To Talk About?

Literally anything and everything. Topics range from art, culture, marketing, race, food, beauty, aliens, music, feminism, cryptocurrency, film, language, tech, and just about anything else you can think of. There is no topic off-limits (yet). The point is simply to connect with other humans.

One new user recollected her first-time experience on Clubhouse with, “I was practicing my terrible Spanish with fellow novices in one room, then listening to musicians make an impromptu R&B song together in the next. This morning, I discussed how to find small stocks to invest in, and later tonight, I plan to join a room called “Why People Act ‘Hollywood’ When They Are Nobodies.” Another member recalls their first time on the app saying, “Within minutes of joining my first chat, Joe Budden, the rapper-turned-podcast godfather himself, popped in to offer his two cents on the topic du jour.” As you can see, the conversation topics are endless.

The rooms you see in your feed are based on your very own personal algorithm, which corresponds with who you choose to follow in the app and what you select as your interests when setting up your account. Based on this information, you’ll see rooms hosting conversations on topics that align best with you.

There seems to be a few main reasons people are hooked on this new app. First, it’s great way to network, bounce around new ideas, and get good feedback—especially now, since a high percentage of current users are a part of an exclusive network of industry-leaders (or at least, claim to be). Second, Clubhouse offers a sense of intimacy that you just don’t get on other social media platforms, particularly valuable during a time where face-to-face communication with other people is not what it used to be. And lastly, after what has been a record-breaking year in terms of screentime, with most of us spending more hours than ever passing the time with endless scrolling, the thought of a screenless social media alternative is quite refreshing.

Personally, I’m just excited about something new to dive in to! I don’t know about you, but an app that doesn’t require photoshoot sessions for perfectly curated visual content, or learning choreography to a dance I will almost certainly butcher, is something I can definitely get behind.

If you want to become the latest member of Clubhouse, head over to the Apple store to download the app. As I mentioned before, you can’t officially join just yet (unless you’ve got an ‘in’), but you can reserve your username and join the waitlist. On their website, Clubhouse says the app will be available to the wider public soon, so let the waiting begin!

For those who are already a member on the platform, let’s connect! My Clubhouse username is @meghanf.

What are your thoughts on this new audio-only social media app? Leave your stance in the comments!

Looking for something? Search by keyword below: